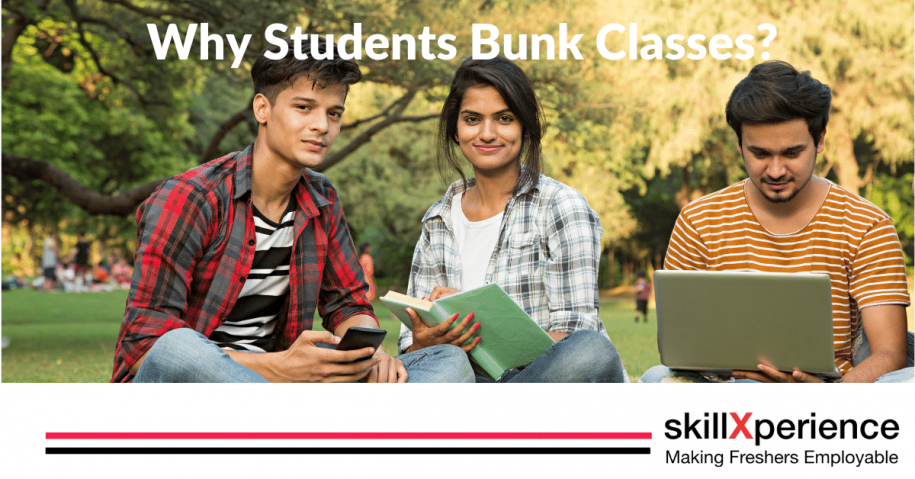 A recent annual state of the working report stated that 5 million men in India lost their jobs between 2016 and 2018. Reports say that India’s unemployment hit a 45-year high in 2017-18. In addition to this our youth have started a new trend of bunking lectures. Question is Why students bunk Classes?

With the GDP growing at over 7% annually and India jumping 23 spots in ease of doing business, why are the unemployment figures so high?

Let’s go back a few decades. According to Pankaj Chandra, Vice Chancellor of Ahmedabad University, Indian education expanded rapidly in the 1960s. It built a large number of universities and educational institutes, even more than China. To achieve this, the only solution was standardizing education.

This standardization created one big framework where examinations became the only way to judge merit. Students who could score 95% marks were held in high esteem; those who score 60-70% marks were considered stupid. In the process, institutes forgot that education was about real people who are different from each other.

Then came the liberalization era in 1991. What followed was a trend that previously was unheard of but is rampant today – students bunking lectures.

There are many reasons for bunking lectures for this. I’ve elaborated on some of them below:

Unfortunately, it was an opportunity that the outdated educational system couldn’t address. The result was the birth of academies like NIIT, Jetking, and Aptech.

Many students feel (rightly) that they get more relevant knowledge from such academies. This knowledge and certification prepare them better for current opportunities and job prospects. This is one reason why students bunk lectures.

When exam scores became the benchmark of performance, the number of coaching classes also mushroomed.

It’s an open secret today that many professors who teach in colleges run their own coaching classes also. Children who attend these classes score higher in their exams and have their attendance “handled” as well.

To ensure their children keep up with Sharmaji ka beta, most parents enrol them in coaching classes. Because they’re assured of good scores in exams and attendance, children bunk lectures in college.

What often happens when a business scales up too fast? It hires people that are not skilled enough to help it achieve outcomes. Something similar happened (and continues to happen) in the higher education sector in India.

With the explosion in the number of universities and institutes, the requirement for professors who could teach children the skills needed by industries increased as well. The problem was, most professors were (are) not qualified enough to impart these skills. To go a step further, many institutes still don’t have enough professors to teach the subjects. This means students have to either fend for themselves or turn to – you guessed it – coaching classes.

If colleges have to set aside marks for student attendance, it’s an indication of how interesting their faculties are. Let’s be honest. Can we really blame students for bunking such lectures?

Not all students can afford coaching classes. Among those who can, not all can keep up with what’s taught. As a result, more and more students are turning to online education portals for help with learning.

Free portals like Khan Academy help children cement the fundamentals of math, science, and other subjects. Online education portals like UpGrad and UnAcademy offer courses that train and certify students on skills that prepare them for opportunities that are relevant. Students can pace their own learning on these sites. They can return to a topic that they don’t understand fully. Or they can speed by a topic they’ve understood well.

The rise in popularity of the internet and online educational portals has also contributed to the rise in the number of students bunking lectures.

In school, children discuss with each other about how cool college is and how it would be to be able to bunk lectures. They feel excited by this prospect. When these children make it to college, they want to “live the dream.”

6. Other Reasons for Bunking Lectures

These students attend lectures just enough to ensure they score the marks needed to pass when it comes to attendance.

What These Reasons for Bunking Lectures Highlight?

The above reasons highlight the gaps in the Indian education system and its perception among students today.

Institutions charge exorbitant fees but don’t have the infrastructure to provide relevant skills to their students. This is why despite the high number of students graduating, most of them remain unemployable. Students also pursue education just for the degree, not the learning.

The archaic educational system that applied to the industrial age is no longer valid today. We’re shifting to the knowledge economy. A shift in educational curriculum and methods of teaching is the need of the hour. We need to build a system that encourages students to learn and to think for themselves. Only then can we lay the foundation for a nation that will prosper in the coming decades.

What are your thoughts on the current Indian educational system? Do leave a comment because I would love to hear them.