Why Has India Not Produced a Google or Apple Yet? 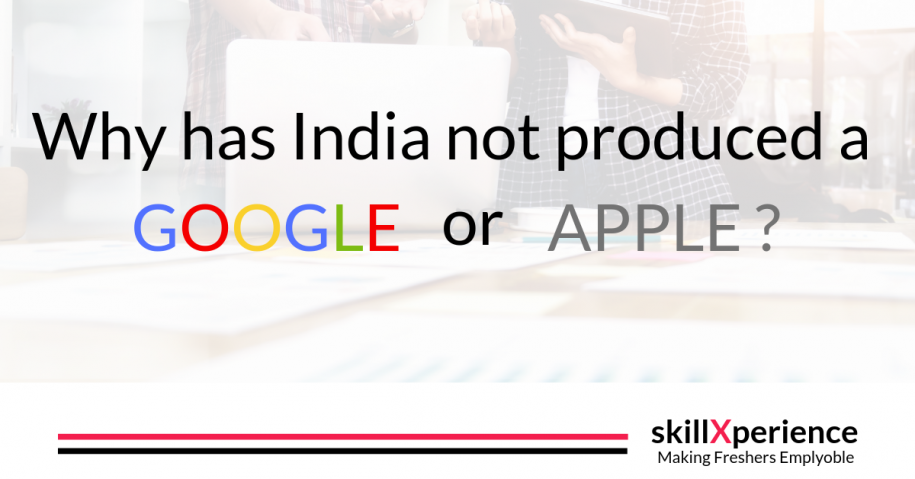 Last week, India became only the fourth country to land a probe on the moon. Congratulations to ISRO are in order. This is a proud and happy moment for every India living in India and abroad.

But this joy led me to another question – despite sending orbiters into space, why is India rarely seen on the international technology and science radar? Why does the world’s youngest and population struggle to create a Google, Facebook or Apple of its own, especially considering how good we are at software? Don’t you think it’s the lack of innovation which might be a factor to this?

Doesn’t this question beg some pondering? Well, I did some pondering and asking (here and here). Below are some interesting reasons that came up.

Most Indians are risk-averse because our culture puts pressure on youth to get married and have a family quickly. The youth must find stable jobs and lifestyles to build and support their families.

The resulting home loans, vehicle loans, educational loans and so on make it impossible for the youth to break out and try something novel in their careers. Money becomes the central driving force and limits their risk-taking ability. And without risk, there’s no innovation.

2. We Are Good Followers

We might not admit it openly, but we measure people’s success by how much money they make. This is our nation’s worst kept secret. As a result, people put together a startup by following models that have worked in the west and look to make quick money through it rather than focusing on how it can impact society and add value to it.

Case-in-point, Ola, OYO Rooms and Flipkart. I have huge respect for what these companies have achieved, but they’re essentially models that already worked in the West. They had little (or nothing) to differentiate themselves from the global market leaders. That’s why they could do little to thwart Uber, AirBnB and Amazon when the latter entered India.

On the other hand, companies that created value for the Indian market – RedBus, MittiCool, Edible Cutlery – whose models could be replicated across Asia and Africa, barely get noticed because they couldn’t make money quickly enough.

3. Our Fear of Failure

Right since childhood, we’re rewarded for obedience and punished for rebellion. This is because when we do what we’re told, we get good marks and land good jobs. (This is a secret reason why toppers get placed first as well. Though they probably lack work skills and EQ, companies know that they won’t shake the status quo at work because they’ve learned to toe in line with the educational system and become good “Yes” men.)

On the other hand, the rebels – those who think for themselves and have the stomach for risk – don’t score well. They are deemed as “failures” by the educational system. And “failures” or dropouts have no place in the Indian ecosystem.

Imagine what kind of a place the world would’ve been if Steve Jobs, Bill Gates and Mark Zuckerberg were deemed as failures and shunned by society!

4. Our Aversion to Think

India is one of the largest markets for TikTok and other social media platforms because of our widespread of youth. And for good reason. Look around and you’ll find the youth glued to their smartphones watching Netflix and YouTube, browsing social media and mindlessly scrolling through the internet. But how many of them invest their time and energy to learn new skills?

The Indian youth are probably averse to learning because it brings back memories of their time at educational institutions which were boring in the first place. But the flip side is that Indians are very slow in learning the skills of tomorrow (and even of today). Without learning, there is no broadening of the mind and no innovation

Are Indian youth averse to learning because it brings back boring memories of school and college?
Click to Share

5. No Ecosystem to Fuel Innovation

According to industry sources, 1 in 7 startups in South East Asia is started by Indians or Indian origin CEOs. They cite many reasons for this like ease of doing business (it takes about 30 minutes to set up a company), access to larger markets (being registered in Singapore makes it easier to enter Thailand and Indonesia), better tax rates, and more support from the government (mentorship, seed funding, introduction to investors, etc).

On the other hand, India’s share to the global R&D expenditure is just 3 percent, five times lower than China. It takes much effort to clear through the red tape and bureaucracy to set up a startup and navigate through archaic policies with little or no support from governing bodies. This is why the enterprising youth prefer to set up shop in more business-friendly environments, leading to “Brain-Drain”.

But Things Are Changing

Contrary to how this article appears, the news is not only gloomy. The picture is getting better.

With basic needs getting fulfilled, Indians are looking to innovate to improve the quality of life around them. And the nation is becoming a hotbed for investors.

For instance, India filed over 2,000 patent applications in the last year, marking the highest growth among the top 15 nations. Indian startups raised more than $3.9 billion in 2019 already. The government’s initiatives like Startup India and MUDRA schemes will continue to propel hungry aspiring entrepreneurs to take the leap.

We have a long way to go. But we will get there.

What do you think India can do to build value-creating unicorns? I would love to hear your thoughts in the comments

Tags: india and technology, lack of innovation, why we dont have successful startups?