College Students are un-employable. Whose fault is it anyway? 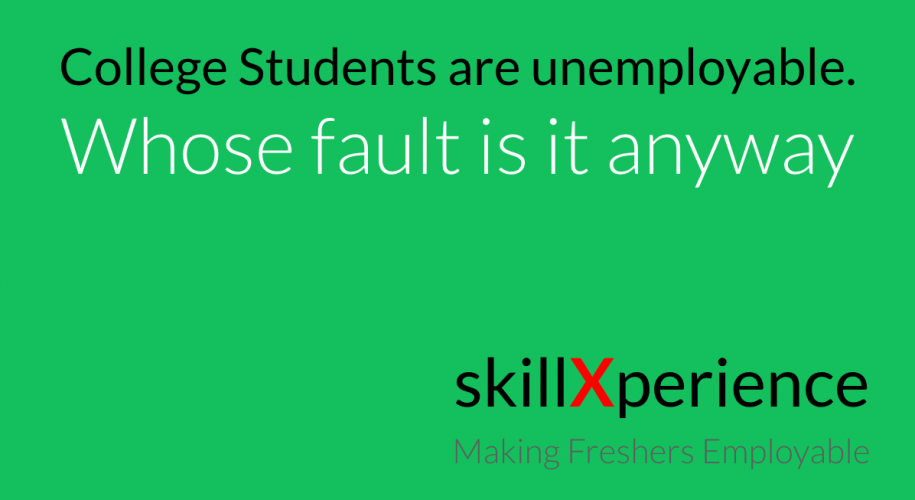 Most employers and HR managers complaint that college students and freshers are unemployable. We find it easy to blame it on Colleges, government and Society at large. easy to be superficial and avoid seeing the real problem. very easy to say that somebody should do something.

We have a different perspective on this problem. Let us consider that we are Generation A and our Kids (or College students) are Generation B. Let us divide the society into these two groups.

The ideas discussed in this article might not be applicable to few prestigious institutions like IIT or IIM and other reputed institutions, But they apply to almost all other institutions.

Can we put blame on Teachers and professors?

Probably not. We have to understand that most of the colleges have most of the who have never had Industry Experience. They passed their education as students and then joined the Education system as educators. Their professors also had followed the same path.

So the Professors and Teachers were never exposed to Real Industry or the real world. That may be the reason why they don’t appreciate the real importance of Real Industry relevance in Education.

Also, the Selling point of an educational institution is the infrastructure and not best teachers.

Can we put blame on Education Institutions?

Not Fully. Education Institutions are also commercial organisations and they have to see that they are viable commercially. Though they enjoy lots of benefits of being a Non-profit organisation. But still, they have to look after growth and costly real estate infrastructure.

This is because of increasing demand of better and costlier infrastructure from the Parents and students.

Can we blame the Parents?

Partially yes, because nowadays parents look at the College infrastructure more than the teachers in those institutions. Many parents want to make decisions based on their historical understanding of the Career options rather than evaluating current and future trend.

Can we blame Government?

We as Indians like to blame the Government for each and everything. Hence we see that most of the blame for lack of education infrastructure and lapses is put on Government. This cannot be always true. India is a huge country, committed and powerful the government may be, it will not be able to bring overnight changes.